Raiffeisenbank Austria d.d. (RBA) and the Triglav Group signed an agreement for the sale of a majority in the only Croatian pension insurance 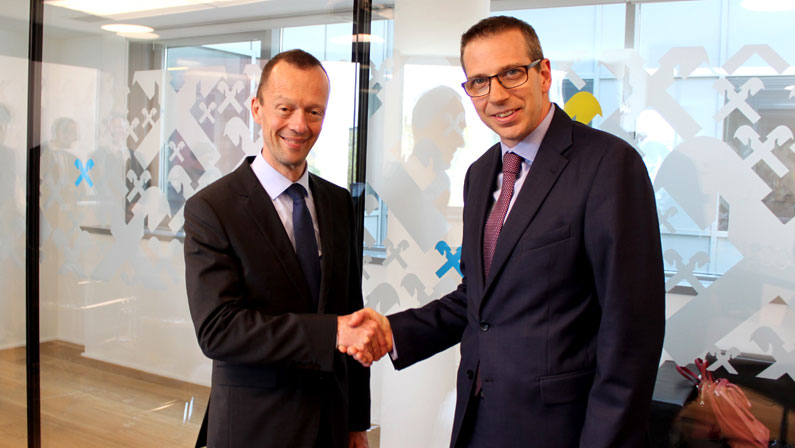 Raiffeisenbank Austria d.d. (RBA) and the Triglav Group signed an agreement for the sale of a majority in the only Croatian pension insurance company – Raiffeisen mirovinsko osiguravajuće društvo d.d. (RMOD). Under the agreement, RBHR sold its major holding (75 per cent minus one share) in RMOD while retaining the ownership of the remaining 25 per cent (plus one share).

In accordance with its business strategy on the Croatian market and with a view to strengthening the position of banking and financial services, Raiffeisen Bank has decided to reduce its presence in the insurance segment. On the occasion of sale of the majority in the Raiffeisen Pension Insurance Company, Inc., the CEO of RBA Michael Georg Müller said: "I am extremely pleased that we have found a partner for this deal in the Triglav Group, a renowned name in the insurance world. I believe that, as the Bank and the Group in Croatia, we have proven our innovativeness when entering this segment. Thus, since its establishment the Raiffeisen Pension Insurance Company, Inc. has remained the only such company in Croatia with more than 15 years of successful operations and experience,” Müller concluded.

RMOD continues to be the only pension insurance company in Croatia authorised to pay out pensions under both the mandatory pension insurance scheme and the voluntary scheme, which is based on individual capitalised pension savings (so-called 2nd and 3rd pillar).

In the light of more than 15 years of its successful operations, we can say that RMOD’s business is on a stable footing; it has closed each year with a positive P&L.

Furthermore, this business cooperation does not affect its operations nor does it change its business policy toward the mandatory and voluntary pension fund management company Raiffeisen društvo za upravljanje obveznim i dobrovoljnim mirovinskim fondovima d.d. (RDMF), so the Bank is to press on with its fruitful cooperation with these funds.  The Raiffeisen Mandatory and Voluntary Pension Fund Management Company, Inc.) manages three mandatory and seven voluntary pension funds.